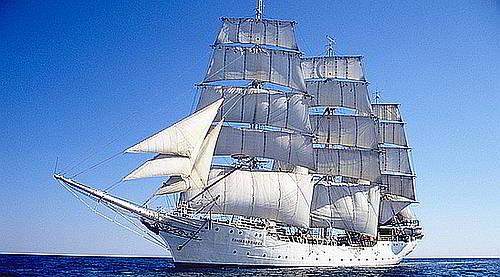 Eric Newby was eighteenÂ when he signed onto a four-masted sailing ship as an “apprentice seaman.” He spentÂ 1938 to 1939 sailing around the world in the grain trade.

When he arrived home in Britain, World War II had started. Commercial sailing ships would never again carry cargoâ€”sail would become a hobby and a sport rather than a livelihood. The annual “grain race” fromÂ Australia to Britain was over for good.

The memoir Newby published in 1956 is famous among sail aficionados. Newby knew the days of sail were numbered when he set out and he kept diariesÂ so he could write about the voyage later. He vividly describesÂ the hard, dangerous work of sailing. His use of dialogue, description and scene is modern, even though his ornate syntax bears the mark of Churchill’s England.

Newby also has a veryÂ English sense of humorâ€”wry, self-deprecating. As a result,Â The Last Grain RaceÂ isÂ a coming-of-age narrative full of reflection. Ultimately, my favorite moments are when Newby writes aboutÂ how young and naive he was.

In this passage, Newby is thinking aboutÂ his heroic-adventurous ideas about travel, which he picked up from his childhood neighbor Mr. Mountstewart. It was Mountstewart who suggested the young man apprentice on a sailing vessel.

Now his shipmates areÂ tellingÂ him stories of other amazing journeys he should take. He’s tempted to keep going.

HereÂ Newby listens to shipmate Kroner reminiscing about an exotic island off the coast of Lebanon. 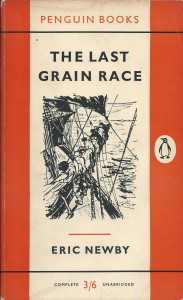 As he spoke I listened to him with mounting restlessness until the sun was almost vertical overhead and, obscured by the jibs, left us in shadow.

First it had been Mountstewart who had unsettled me, uprooted me, and sent me into exile while he enjoyed my experience vicariously by his study fire. Now it was Kroner with his literary romantic approach to the sea who had been sent to disturb me. Listening to him, I found it difficult to tell at which point his memories cased to be of authentic experience and became something created by his own splendid imagination. I never discovered the truth; everything he said reminded me of something I had read long ago but was unable to identify or put a name to.

I began to wonder whether my face had an air of guileless receptivity that invited others to flights of wild fancy. Had Mountstewart really invented the paravane, had he ever smoked his pipe at the skysail yard of a clipper? Had Sandell ever been to the Arctic? Had Martini Nordlund ever existed? Was Hilbert’s story of the moonlight part of a complicated conspiracy to delude me? And finally, was Kroner’s story the result of an overdose of The Wind in the Willows and the letters of T.E. Lawrence? I didn’t know, but I was sure that if I succumbed to Kroner’s persuasion and went to his island I would encounter there someone who would tell me that the only place worth visiting was a small salt lake in North Asia.

The rhythm, language and syntax are perfectÂ for the public-school British audience of the nineteen-fifties. But more importantly, Newby describes hisÂ seduction-by-stories thoughtfully, as if he’s observing himself from the outside. This ability to stand apart from oneself often makes for the most striking moments in a memoir.

Despite Newby’sÂ skepticism, he went on to become a best-selling writer of travel memoirs. Like The Last Grain Race, his otherÂ books typically take a wry tone and emphasize the discomforts of travel, making him a forerunner of twenty-first century travel writers. But his writing is never cynical. Though he suggestsÂ travel stories areÂ a kind of mirage, he also suggestsÂ the unreliable nature of these stories is part of their charm.Â â™¥

The Last Grain Race is available at Amazon as a paperback, Kindle edition or audiobook.