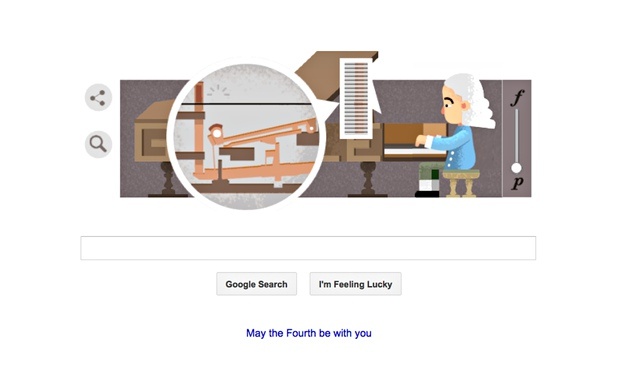 Today’sÂ Google doodle celebrates the little-known Bartolomeo Cristofori, who invented the piano. He was born today in 1655, and spent two decades developing his new alternative to the harpsichord, the pianoforte. Unfortunately, the piano didn’t catch on in his lifetime. He died in 1731, without fame.

Cristofari’sÂ doodle, which plays music and highlights the inner workings of the piano, is particularly well-designed. It clearly shows that Cristofori invented the piano.

ItÂ also allows users to adjust the music volume from piano (soft) to forte (loud). The animated piano player in breeches and white wig demonstrates that striking the keys harder produced louder notes. The fact that theÂ piano could be played at varying volumes was aÂ majorÂ advantage over the once-popular harpsichord.

It’s sad and striking that the inventor of the piano wasn’t recognized in his lifetime. Today, it’s hard to believe the piano was once a strange new invention of dubious usefulness.

For everyone who creates something beautiful, Cristofori’s story has a hard truth. If you create something wonderful, it will find an audience. It will be appreciated. Perhaps someone will even celebrate your birthday with the future equivalent of a Google doodle.

And for everyone who scoffs at an eccentric cousin or neighbor with outlandish ideas, Cristofori is a reminder to judge each invention and creation on its own merits. Popular opinion changes swiftly. That weird new invention or story you don’t understand might be valuable to the world after all. Just you waitâ€”a century or two. â™¥