Today’s Google doodle honors writer, adventurer and inventor Nellie Bly. It’s a cuteÂ tribute to the nineteenth-century muckraker and women’s advocate. She was best-known for her expose of life in a New York insane asylum and her race around the world (in which she beat her opponent as well asÂ Jules Vernes’ 80 days).

This got me thinking: it’s the first time I’ve seen a Google doodle honoring a writer. Inventors and computer scientistsâ€”those are the usual Google honorees.

But maybe it’sÂ just that the US version of Google doesn’t showcaseÂ many writers. Google varies from country to country. It turns out that in some countries, Google has displayedÂ numerous doodles honoring famous authors.

The Czech Republic and Slovakia have a disproportionately large number of writer doodles relative to their population. Australia, too.

By comparison, I looked up a few major American writers and no luck.Â Nothing for Edgar Allen Poe, William Faulkner, or Ernest Hemingway. Vonnegut, Salinger, Ginsberg orÂ Capote? No. Edith Wharton, Toni Morrison, Willa Cather? No. What about Thoreau or Emerson? Nope.

What about British or European writers who are famous in the United States? We usually don’t get to see their doodles. Google has designed doodles in honor of Charles Dickens and Jane Austen (above) but didn’t display them on the US homepage. Why do the Czechs get to honor more writers than we do?

Google has been publishing itsÂ doodles since 2000. The company has a team of illustrators who have created roughly 2000 images to date. The company says theyÂ choose subjects based on “interesting events and anniversaries that reflect Google’s personality and love for innovation.”

With innovation in mind, I also searched their archives for science fiction writers and children’s authors. I searched for poets.Â After spending way too much time inÂ the archives, I found eight writersÂ besides BlyÂ to beÂ honored on Google’sÂ US homepage. ThreeÂ of them were honored worldwide, and four were for domestic consumption only. Here they are:

May 5, 2015, Google celebrates the writer and adventurer’s 151st birthday. The doodle in her honor is visible in the USA, Canada, Australia, India, and a pretty random list ofÂ countries in Europe, Africa and South America.

November 30, 2011, would have been hisÂ 176th birthday. The cleverÂ doodle incorporates the Google logo into Tom Sawyer’s most memorable story. This oneÂ appeared around the world.

January 7, 2014, was the 123rd anniversary of the writer’sÂ birthday. The doodle depictsÂ the deep South setting of novelsÂ such asÂ Their Eyes were Watching God.Â This one didn’t appear on any of Google’s overseas homepages.

One of two children’s authors to make it to the US homepage. June 5, 2011. The author of Oh, What a Busy Day! would have turned 92 on June 5, 2011. Google honors him with an original scene of life in Busytown. Like Hurston’s doodle, this one was only for US audiences.

On February 27, 2014, Google honored Steinbeck’s 112th birthday with a beautiful slideshow illustrating his major works. Follow the link and take a look (click on the image to advance to the next page). It includes The Grapes of Wrath, Cannery Row, Of Mice and Men, The Pearl and Travels with Charley.

We got to enjoy this one just here in the United States.

October 18, 2012, was theÂ 161st Anniversary of Herman Melville’s Moby Dick firstÂ coming off the presses. The illustrator came up with a few possible designs before settling on this woodcut-style image. The negative space forms aÂ white whale and the whale’s spout forms the L of Google.

This was one of the rare American writers whose doodle was displayed worldwide. Way to go, Melville!

The poet’s doodle is an animated series of illustrations to accompany one of his most famous poems. Google posted it on the US homepage on Feb. 1, 2015.

The second children’s author to make the cut. March 2, 2009, was the 105th birthdayÂ of the prolific writer and illustrator. The doodle isn’t particularly creative, though, because his designs are pretty distinctive.Â Even Google doesn’t dare tinker with them.

It’s interesting to see that Dr. Seuss is well-known in certain countries beyond our borders. Check out the assortment of places where his doodle appeared: 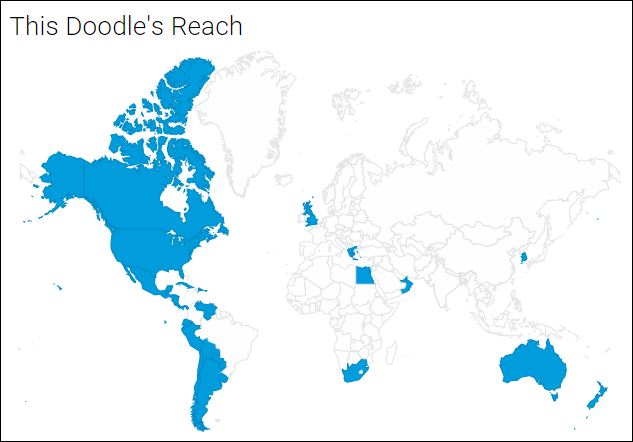 The one international writer to make it onto the Google homepage in the United States. Though Verne was French, his science fiction and adventure storiesÂ were popular around the world. Accordingly, his doodle was displayed everywhere in Google’s reach.

His doodle is an amazingÂ piece of animation. Visit the page for yourself. It’s possible toÂ useÂ the lever toÂ maneuver the submarine like Captain Nemo.

I found many Google doodles honoring writers born outside the United States. But besides Verne, none of them got play here. I’ll post a few of them in future so weÂ can honor them too.

ThisÂ beautiful hand-crafted image celebrated the 148th anniversary of Wilder’s birth in a log cabin in Wisconsin. Wilder’s Little House books, based on her childhood and adolescence on the prairie, must have been read abroad as well: the doodle appearedÂ throughout North America and in two dozenÂ other places.

I’m glad Google made good choices. They haven’t honored many writers in the United States, but the ones they selected are a mix of familiar (Twain) and less well-known (Hurston). Three of the ten are women, and two are African-American. The listÂ doesn’t discriminate by age either, giving just as much credit to the authors of best-selling picture books. And we see a mix of elevated, challenging literatureÂ (Melville) and direct, colloquial story-tellingÂ (Wilder).

The list includes one journalist, one poet, two picture-book authors, five novelists and one memoirist. Most of that variety entered the list in 2015, when Google added Bly, Hughes and Wilder. 2015 has actually been a big year for writers on the US homepage. Does that mean maybe Google is thinking about honoring more writers in the United States?Â â™¥