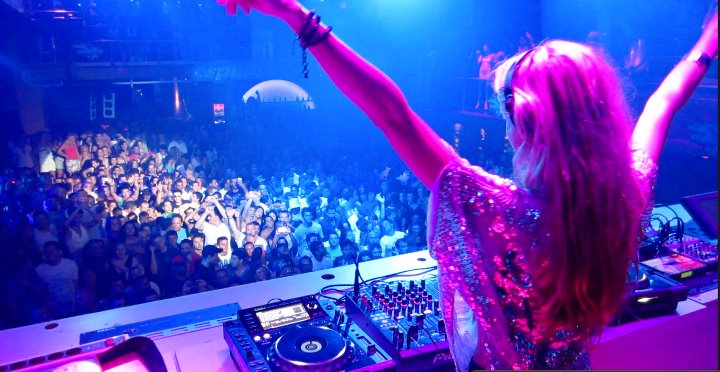 I love the word anthem, with its many layers of meaning.Â An anthem is more than a song. ItÂ has a groove and opens your heart. A great anthemÂ also has lyrics that aim high. It calls on you to believe the world is better than it looks. It conveys a sense of wonder or beauty.

The word anthem goes back at least a thousand years. The late Latin word antiphonaÂ became the Old English antefn. ItÂ gained a “th” during the sixteenth century.

For most of history, the wordÂ referred specifically to sacred choral music. In the eighteenth and nineteenth centuries, with the rise of national symbols, it came to refer toÂ a patriotic national song. The British national anthem is, in fact, a hymn (God Save the Queen), so it made sense to call it an anthem.

By JiÅ™Ã­ SedlÃ¡Äek – Frettie (Own work) [CC BY-SA 3.0 (http://creativecommons.org/licenses/by-sa/3.0)], via Wikimedia CommonsBut it’s less clear how to define theÂ newestÂ meaning of “anthem”â€”a rousing dance song. AÂ British dictionary tries to define anthem as “a popular rock or pop song.” This definition misses the fact that an anthem has to have a certain grandness to it, harking back to the original meaning of the word as a devotional song. Many popular rock songs aren’t bold enough to be anthems.

One recentÂ American dictionary calls an anthem “a usually rousing popular song that typifies or is identified with a particular subculture, movement, or point of view.” This definition includes the word “rousing,” which is important. But this overstates the importance of a group subculture to a modern anthem. In the twenty-first century,Â an anthem doesn’t have to express devotion or loyalty. A dance anthem shows devotion to the power of music, and that’s it.

The twenty-first century usageÂ dates back roughly a generation. When I lived in the UK in the nineties, I usually heard the word in the phraseÂ “Ibiza anthems”â€”the big summer clubbing hits. Whenever I heard the phrase, it gave me a feeling that the summer partying on Ibiza must beÂ something magnificent. The young Brits vacationing onÂ the Spanish island may look like drunk partiers, but maybe theyÂ were declaring allegiance to a better world beyond John Major and Tony Blair.

In 1997, Virgin Records added to its list of cheesy annual compilation CDsÂ The Best Club Anthems in the World…Ever! Within a few years, anthem came to describe a certain kind of electronic dance track, the kind of rhythmic, electronic stuff spun by Ibiza DJs and exported to clubs across Europe.

But how do we recognize an anthem?

Looking back in time, the playlist of thatÂ 1997Â Best Club Anthems in the World…Ever! is a pretty random mix. ItÂ includes obvious choices like Chumbawumba’s Tubthumping. Definitely an anthem.Â But it also inexplicably includes the irksomeÂ pop song Peaches by the Presidents of the United States of America.

And on a 2014Â DutchÂ list of Ibiza anthemsâ€”and no one knows club music like the Dutchâ€”the songs don’t sound very anthemic to me. Apparently,Â a track can become an Ibiza anthem just by getting played a lot.

That’s marketing for you. Everyone wants to claim their track is an anthem. Their songÂ is inspirational, irresistible.

Step back from the language of record producersÂ and it’s obvious not every pop songâ€”or every dance tuneÂ or club trackâ€”can be an anthem.

But anthem is a great word to describe a particular kind of song.

The one that makes you turn up the volume till the car vibrates.

The one that getsÂ youÂ up on the dance floor even though you just ordered a new round of drinks and wantÂ a cigarette.

The one you sing along with.

The one that makes you raise your hands in the air, before you even know what you’re doing, like a Pentecostal filled with the Spirit.

I’ve got tough standards for anthems. The word started out to describe church music and patriotic songs, and it captures how even secular music can stir emotions. If it doesn’t make me feel like devoting myself to something, it’s not an anthem.Â â†’